BLOG TOUR: A Change of Mind and Other Stories, by Nick Wilford

Thanks for having me over today, Clare. I’d like to talk a little about how my novella, A Change of Mind, arrived at its destination of publication after a journey of about five years. Sometimes stories take a long-winded route, even if doesn’t take them that long to actually get written.

I was going about my business one day when a scene flashed into my head. This was in 2010, when I was writing a whole lot of short stories. However, I only made a note of the idea at that time and didn’t do anything more with it. The scene involved a very irate woman having coffee with her surgeon in a futuristic shopping mall. However, this is not a traditional plastic surgeon, but one who performs procedures to change people’s personalities. The woman is stating how she intends to sue the surgeon, as instead of becoming kinder and more compassionate as requested, she is harder and more bitter.

Although I didn’t write it at the time, the idea stuck with me. Three years later, I was waiting for my CPs to get back to me with some feedback on what became the first part of my series and I was looking for something to do. I decided to pursue the personality-change idea, only now the angry woman had changed into a timid man in a time not too far removed from our own, who undergoes an operation to become super-confident. Not too surprisingly, in common with the original iteration, things don’t quite go to plan. It’s not that the operation is unsuccessful this time, rather that it’s too successful.

I posted about the ongoing work as part of DL Hammon’s WIP It Blogfest, and was buoyed up by the positive responses. I quickly finished the story which ended up at a novella-length 26,000 words. It took about a month and then I promptly forgot about it again. It sounds like I have a very short attention span, but truthfully I got immersed in the feedback I had now got back from my CPs and really, with writing, I can only think about one story at a time. That was 2013. As some of you know, my stepson passed away very suddenly on November 9th that year. I abandoned all writing for about six months after that (I was actually doing NaNo and was right on schedule, but I haven’t yet been able to face picking up that particular story again). After dabbling in some A-Z posts in 2014 and generally seeing what people were up to, I decided to have a look through my computer files to see if there was anything I could work on and found my novella again. I sent it to Kyra Lennon to read through, followed by Annalisa Crawford, and was amazed at their responses – they only suggested a couple of minor changes! This was a far cry from any other feedback I had had on longer works, which featured pages of helpful suggestions and copious comments from patient but, I imagined, long-suffering readers. Did I really have something here?

Kyra offered the suggestion of including the novella as part of a collection, for which I am grateful. Hopefully this makes for a more satisfying reader experience. And releasing such a collection seemed to be a good way of dipping a toe into the publishing pool (or ocean) without the long-term responsibilities of releasing a series. So here I am, five years after the original idea, two years after writing it and one year after rediscovering it.

Has a story of yours taken a circuitous route to writing or publication? Did the original premise of the story change over that time? Have you ever had a story come back and surprise you? 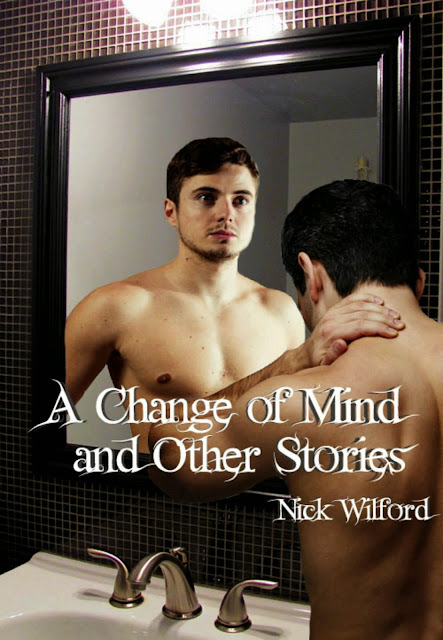 A Change of Mind and Other Stories consists of a novella, four short stories and one flash fiction piece. This collection puts the extremes of human behaviour under the microscope with the help of lashings of dark humour, and includes four pieces previously published in Writer’s Muse magazine.

In A Change of Mind, Reuben is an office worker so meek and mild he puts up with daily bullying from his boorish male colleagues as if it’s just a normal part of his day. But when a stranger points him in the direction of a surgeon offering a revolutionary new procedure, he can’t pass up the chance to turn his life around.  But this isn’t your average surgeon. For a start, he operates alone in a small room above a mechanic’s. And he promises to alter his patients’ personality so they can be anything they want to be…

In Marissa, a man who is determined to find evidence of his girlfriend’s infidelity ends up wondering if he should have left well alone.

The Dog God finds a chink in the armour of a man with a megalomaniacal desire to take over the world.

In The Insomniac, a man who leads an obsessively regimented lifestyle on one hour’s sleep a night finds a disruption to his routine doesn’t work for him.

Hole In One sees a dedicated golfer achieving a lifelong ambition.

The Loner ends the collection on a note of hope as two family members try to rebuild their lives after they are torn apart by jealousy.

Add it on Goodreads

Nick Wilford is a writer and stay-at-home dad. Once a journalist, he now makes use of those rare times when the house is quiet to explore the realms of fiction, with a little freelance editing and formatting thrown in. When not working he can usually be found spending time with his family or cleaning something. He has four short stories published in Writer’s Muse magazine. Nick is also the editor of Overcoming Adversity: An Anthology for Andrew.

Visit him at his blog or connect with him on Twitter or Goodreads.