Today I'm thrilled to be hosting the lovely Crystal Collier as part of her blog tour for young-adult paranormal historical-romance Moonless!

For my stop on the tour, Crystal has provided me with both a Excerpt and Truth or Lie Game, as well as a Rafflecopter giveaway!

Unravel the mystery of the Moonless night! Hidden in each of the 8 blog tour excerpts is a single word. Gather all 8 and figure out the sentence to win a free copy of Moonless. Send your mystery sentence to crystal (AT) crystal-collier.com with the subject MYSTERY SENTENCE before December 10, 2013, and you will be entered to win one of 10 copies of MOONLESS—just in time for Christmas. Happy hunting!

Kiren unlatched the balcony door with a thin metal hook and slipped inside. He refastened the catch, gut twisting at the moonless sky beyond the glass. How long would his luck hold?

Alexia lay on her back, one arm lost in her mass of dark hair, the other tucked across her chest. A foot dangled off the edge of the mattress, tempting him to slip it back beneath her blanket.

He grinned, envying her carefree abandon. Her latest read lay on the bed beside an extinguished candle. He lifted it. Fanciful words danced back at him. They too made him smile. She wanted adventure. He could supply that.

His eyes landed on the card he’d given her father and his smirk died. It had been shredded and reconstructed. His chest tightened. “Oh Alexia . . .”

Truth or a Lie Game:

Crystal gave me two truths and one lie to test your "lie detector" skills. Can you figure out the lie? Those who do will be entered in a random drawing to win one of three ebooks of MOONLESS. How cool is that? You have until November 30, at 11:59 p.m. to guess--and be sure to come back for the answer and winner announcement on 9th December!

1. Crystal took the people’s choice, best editing, and best actress awards in the NHS Film Festival.
2. At the peak of her acting years, she was cast in three plays simultaneously.
3. She was once the star of an Indiana Jones/Lord of the Rings movie remake.

Okay human lie detectors, which is the lie? Enter your guess below! 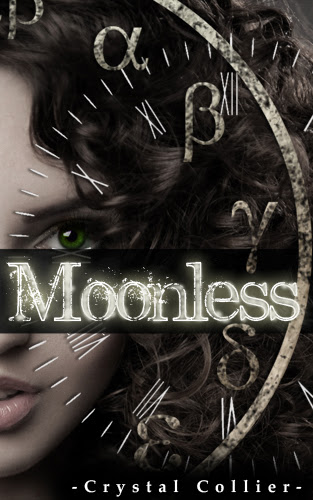 Blurb: In the English society of 1768 where women are bred to marry, unattractive Alexia, just sixteen, believes she will end up alone. But on the county doorstep of a neighbor’s estate, she meets a man straight out of her nightmares, one whose blue eyes threaten to consume her whole world—especially later when she discovers him standing over her murdered host in the middle of the night.

Among the many things to change for her that evening are: her physical appearance—from ghastly to breathtaking, an epidemic of night terrors predicting the future, and the blue-eyed man’s unexpected infusion into her life. Not only do his appearances precede tragedies, but they’re echoed by the arrival of ravenous, black-robed wraiths on moonless nights.

Unable to decide whether he is one of these monsters or protecting her from them, she uncovers what her father has been concealing: truths about her own identity, about the blue-eyed man, and about love.

After an attack close to home, Alexia realizes she cannot keep one foot in her old life and one in this new world. To protect her family she must either be sold into a loveless marriage, or escape with the man of her dreams and risk becoming one of the Soulless.

Praise for MOONLESS:
1. Bethany Kaczmarek, editor at A Little Red, Inc: MOONLESS is powerful, compelling, and
packed with soul. MOONLESS is wonderful. So many threads, such rich backstory. Such
amazing world-building. It was familiar England, yet always hinting at a sense of Otherness.
Made me wonder if those things had really been there all along and I missed them.
2. Sharon Johnston, author of SLEEPER: Collier transports us to a time of elegance and mixes in
supernatural splendor that gives goosebumps.
3. Tammy Mckee: I fell head over heels for the characters. The story itself was magnificent and
the way Crystal writes is beyond that. I truly enjoyed every minute.
4. Rachel Hert, editor at Fantasy Editing: Moonless does a fantastic job building a complex
world filled with a cast of characters that are individuals and stay in your memory. I highly
recommend reading!

Author Bio: Crystal, author of MOONLESS, is a former composer/writer for Black Diamond Productions. She can be found practicing her brother-induced ninja skills while teaching children or madly typing about fantastic and impossible creatures. She has lived from coast to coast and now calls Florida home with her creative husband, three littles, and “friend” (a.k.a. the zombie locked in her closet). Secretly, she dreams of world domination and a bottomless supply of cheese.