Review of EVER by Jessa Russo

In September, I was lucky enough to receive an ARC of Jessa Russo's début novel, paranormal romance EVER.

Today, I'd like to talk about EVER, and why I enjoyed it so much. 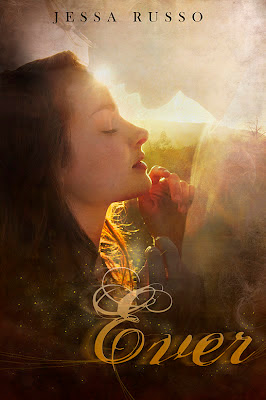 Seventeen-year-old Ever’s love life has been on hold for the past two years. She’s secretly in love with her best friend Frankie, and he’s completely oblivious.

Of course, it doesn't help that he’s dead, and waking up to his ghost every day has made moving on nearly impossible.

Frustrated and desperate for something real, Ever finds herself falling for her hot new neighbor Toby. His relaxed confidence is irresistible, and not just Ever knows it. But falling for Toby comes with a price that throws Ever’s life into a whirlwind of chaos and drama. More than hearts are on the line, and more than Ever will suffer.

Some girls lose their hearts to love.

Some girls lose their minds.

Ever Van Ruysdael could lose her soul.

EVER, at its core, is a love story about a bond so strong it transcends even death. But it’s so much more than that too.

EVER is a story about romance, friendship, mystery and death.

One of my favourite aspects about EVER is the bond the lead character, Ever, and her best friend Jessie share. Their friendship is very real and genuine, and creates some great moments.

The only other friendship that supersedes it is that of Ever, and her ghostly best friend, Frankie. Frankie is a breath of fresh air in the paranormal world. Despite being dead, he manages to remain chipper most of the time, and is always there as a source of comfort for Ever, especially when she has reoccurring nightmares about this death.

Frankie’s upbeat attitude is only dampened when it seems he has a rival for Ever’s affections.

The apparent love-triangle in the book was also a high point for me, because I usually loathe love-triangles in stories. This one is different, as Ever isn’t pining over two guys, one of them is a ghost. I think it’s a very powerful idea to explore, looking at how you get over someone you still love, and is in your life, but you can never have. How do you move on from that?

With a hot new neighbour, that’s how!

The characterization of love interest Toby is where this story really stands out. He’s the perfect balance; not too perfect, but not a completely unlikeable arse, either. He brings out a new side of Ever, and makes her question the person she’s been up until this point. Always underlying Toby is the question of who he really is, and what he gets up to while he’s away. It’s Ever’s curiosity about him that hooked me onto the story. As Ever grew more attached to Toby, and wanted to find out more about him, so did I. He was a mystery waiting to be unravelled.

Another mystery that grasped me by its claws was the circumstances surrounding Frankie’s death, how and why he’d returned as a ghost, and what Ever’s reoccurring nightmares mean. The mythos Jessa Russo created was compelling, and the threads of it are weaved throughout the book, moving it forwards.

For a début novel, EVER has a lot going for it, and though I did bang my head in frustration sometimes when Ever didn’t question Toby as deeply as she could have about his actions, there were still enough positives to make me want read the second book in this series, and see where Jessa takes Ever, Frankie and Toby next.


AUTHOR BIO:
An unashamed super fan of all things paranormal romance, Jessa Russo reads, writes and breathes paranormal YA, rarely straying from her comfort zone. When not writing or reading, Jessa enjoys making memories with her awesome family and amazingly supportive friends, while secretly planning her next trip to New Orleans. She’s won a few flash fiction contests and had a short story published, but feels her greatest accomplishment is raising the coolest kid ever – a little girl with a Tim Burton obsession and a desire to save every animal she sees.

Jessa will always call Southern California home, where she lives with her husband Jon, their daughter Faith, Bronco the Great Dane and Lola the Chihuahua.