(This was originally written for and posted at Arlee Bird's Tossing It Out, as part of his Highjack This Blog event. Thanks to Arlee for having me, and everyone who commented.)


I thought long and hard about what I was going to post about today, as there are many topics I could have discussed. I seriously considered using today's post as self-promotion, and sharing an excerpt from my current work in progress Sibylline Nights. I ultimately decided against it, figuring if you want to know more about me, my writing and my novel, you can check find it here on my blog.

Instead, I wanted to discuss a topic that would generate some debate and get everyone talking. But what topic to pick? The pros and cons of self-publication versus traditional publication? My personal feeling about Fifty Shades of Grey, and its impact on literature and the publishing industry?

In the end I settled on a subject that has been on my mind for the last few months, ever since a discussion with my brother-in-law, and something I've been wanting to talk about for a while now.

A few months ago, when I was in the market to buy an e-reader, I asked around my fellow readers and book lovers to get their opinions on digital reading.

While a lot of people said it was good that you could store so many books on an e-reader, the overwhelming response was that nothing will ever beat the feel of paper books. Then I bought my e-reader.

I don't think I'll ever buy a paper book again! The only thing I miss about paper books is being able to read in the bath.

Maybe I'm just more digitally minded (I also don't keep 'hard' copies of photographs, all my memories are digitally stored on my external harddrive), but for me, e-readers tick every box, and have opened my eyes to new avenues of reading I've never considered before.

The first time I experienced digital books triumphing over paper books was on May 24th of this year. I was eagerly waiting the final installment in The Secrets of the Immortal Nicholas Flamel series, The Enchantress. I was especially excited, because for the first time in the series' history, the UK release date was just two days after the US release date – as opposed to previous years, when the UK release date was around two months after the US date – meaning that I could read along at the same time as a friend in America, whom I'd shared the series with. We both enjoyed discussing aspects of the book, and it was always frustrating to have to wait two months before I could share her joys and woes over what had happened.

On the morning of  May 24th I went to my local shopping centre – and let me tell you, it's no tiny town square with a handful of shops. It's home to over 250 shops, a cinema, a food hall including  various fast food restaurants, and has a parking capacity of 10,000 spaces – and straight to Waterstones (a UK book retailer that has 296 stores and employs around 4,500 staff in the UK and Europe).

After looking in the Young Adult section, the children's section, the fantasy section and the general fiction section, I went up to the cash desk.

"Do you have The Enchantress by Michael Scott, please?" I asked the member of staff.

After looking up the details on the computer, she informed me that no, they didn't.

I was disappointed, but not disheartened. Determined to get my book, I made my way to WH Smiths (one of UK's largest retailers of books, stationery, magazines, newspapers, and entertainment products, who invented the ISBN catalogue and has over 16, 000 employees in Europe). Once again I was politely told they didn't have it.

My disappointment growing, I checked in both ASDA and Sainsbury's (UK supermarket chains, with 525 and 1000 stores respectively), but neither had the book.

I knew The Secrets of the Immortal Nicholas Flamel series wasn't a global sensation like Harry Potter, but I thought since the series has been printed in 20 languages, is available in 37 countries, and featured in the Top Ten on the New York Times Children's Best Selling Series list, that a shopping centre the size of the one I was at, with two large book retail chains and two supermarket chains, would have somewhere for me to buy The Enchantress.

Feeling let down, I made my way home, and that's when the alternative hit me. I could buy the book online – perhaps if I was really lucky, it would even be delivered before the weekend.

While comparing prices on Amazon and Play, I noticed that Amazon offered a digital version of  The Enchantress, and it was cheaper than the paper version. The added bonus, it would be delivered to my tablet computer instantly. I was sold. Never again would I need to worry about different release dates, not being able to get to the shopping centre, books being out of stock, or dodgy delivery times.

I could have any book I wanted, whenever I wanted, with just a few taps of my stylus.

I downloaded The Enchantress to my tablet, enjoyed it immensely, and that's when I started to discover all the other fantastic benefits of digital books.

While reading, I came across the word chitin – I'd never heard of it before, and curious I highlighted the word, intending to copy it into my web browser. As I copied it, something amazing happened. Up popped a little bubble entitled New Oxford American Dictionary, and gave me the following definition: chi·tin n. [BIOCHEMISTRY] a fibrous substance consisting of polysaccharides and forming the major constituent in the exoskeleton of arthropods and the cell walls of fungi. chi·tin·ous adj. mid 19th cent.: from French chitine, formed irregularly from Greek (see CHITON).

I was in awe. Rather than having to open up my browser, or log onto a computer, with the inbuilt features of my Kindle application, my tablet could give me the definition of a word as I read the story.

Later on, I was introduced to the character Xolotl. Interested in the mythology behind the name, I highlighted it. Sadly this time my dictionary had no definition. But, after clicking on the "more" option, I was able to open my browser – from within the Kindle app – and go straight to Wikipedia, where I discovered that in Aztec mythology, Xolotl was the god with associations to both lightning and death.

Information about character mythology at the tip of my fingers. Never again would I have to be pulled out of a story to look up some details, or try and remember a name once I'd finished the book.

Having a toddler, I found many other advantages of digital books. I could read without him ripping, chewing or turning the pages, and with an added screen protector, it's was safe from sticky fingers.

I could also "close" my book with a moment's notice, and not have to worry about losing bookmarks, or them falling out and my page being lost. For you see, digital books have inbuilt bookmarks, and with a tap of my stylus, a page could be "bookmarked" so I could pick up where I left off. Even more impressively, you can have multiple bookmarks, so I could remember pages with passages or parts that interested me, and share them with my friend who was also reading the book.

The back-lighting on my tablet also meant I could read in bed, in the dark, without the need for a lamp – something I'm sure whoever shares the bed with you would appreciate if they're trying to sleep while you read.

I've found since having the Kindle app, I'm reading more books, because digital books feel more accessible to me. I certainly can't go to the book store in the middle of the night when I have insomnia, or walk around Waterstones in my pyjamas. I can, however, browse the Kindle marketplace both at 2 a.m in the nude if I choose.

Not only that, if a book looks interesting but I haven't quite made up my mind about it, I can scroll down the page, and read reviews by others who have read the book. I can even download a sample of the book (how much of a sample varies from author to author) free of charge.

The variety of digital books compared to paper books seems a lot more too, as many independent authors are self-publishing exclusively as e-books. Some are even free, or cost less than £1. While people may argue the quality of an e-book that costs nothing, I won't. I'm not going to gripe over a few typos if I didn't pay for it, and the story keeps me entertained for the weekend.

There's physical storage advantages to digital books too. I live in an apartment, with very limited space and two children who have a lot of toys. My beloved books now take priority behind buggies, racetracks, play-sets, action figures and countless other things. My current bookshelf is very pressed for space, with books stacked on top of each other, and squeezed in where ever possible. Not to mention the countless tomes I have stored away in cardboard boxes and cupboard boxes. With digital books, your only limit is your memory card, and with external cards and harddrives, that amount can be increased at any time.  Plus you don't have to worry about damage from dust, damp or booklouse who look to burrow into you books, and eat it from the inside! With digital books, if you're unlucky enough to loose or damage your memory card, you can just download a book again. Once you've bought it from Amazon, it's yours for life.

It makes travelling with books easier too. I currently have a Kindle app on my desktop computer, my laptop, and my tablet. If I wanted to, I could also install the Kindle app on a computer at a friend or relatives' house, and access my library there. I can take my whole book collection with me, where ever I go.

People have said digital books "ruin" the experience of reading, but for me their invention has actually heightened it.

Before I end this post, and open it up to others, I wanted to mention one digital book very close to my heart. 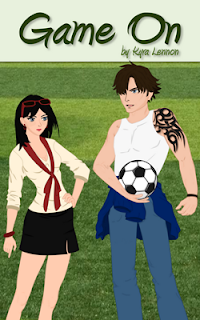 On August 6th 2012 a very close friend of mine, Kyra Lennon, is releasing her début novel, a contemporary romance titled Game On. Without the invention of digital books, she might not be releasing her story now, as she'd be going through the process of querying, getting an agent and then submissions for publishers (I'm not going to argue the pros and cons of self-publishing versus traditional publishing now. That's another post for another time). Suffice to say, Kyra weighed the options, and wanted complete creative control over her novel, something digital books offered her.
by Clare _ Tuesday, July 24, 2012