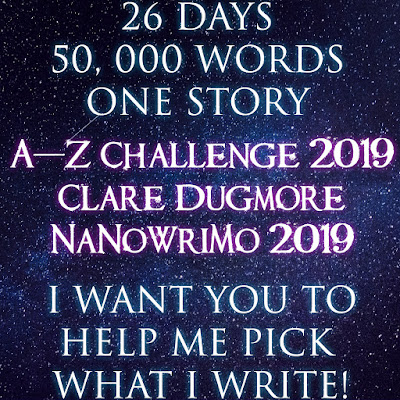 Yes, I know I haven't updated in almost two months. I have started writing a March entry (which will become a March/ April entry now), but I've been busy with work (YAY! I have work. More on that in the full update). But I wanted to announce my participation in both NaNoWriMo and the A-Z Challenge this April, and ask for your help.

I've always wanted to combine the A-Z Challenge with NaNoWriMo. Some of you may remember me previously serializing All It Takes for the A-Z challenge, and the format works perfectly for me.

This time around I want to write a new(?) story and post a 2,000 word instalment each day for the challenge (the title of the chapter will be a corresponding letter of the alphabet.)

My problem is which story, and this is where y'all come in.

I have four different story ideas, and I want everyone to vote on which you'd like to see me write in April. Part of my reason for doing the challenge the way I am is to attracted new readers to my work, so what better way to do so than by writing something you're all interested in?

Here are the choices (some might be familiar to you, as they're re-writes of previous unpublished works.)

A recent episode of The Flash had me wondering, if parallel universes were real, would you be drawn to the same person from all universes? What happens if you've lost your lover and meet an alternate version of them?

The story I have in mind centres around a young (25-ish) lesbian couple - Sian and Jasmine - who met in uni, and have recently gotten married. Six months after getting married, Jasmine is killed in a car accident. Sometime later, a freak storm opens the doorway between universes, and a version of Jasmine comes through from Earth 2 to Earth 1, where she meets Sian. But E2 Jasmine doesn't know Sian, because in her universe they never met and fell in love.

2. Choosing Sides; urban-fantasy about witches oppressed by the government.

Those of you familiar with my writing will know Choosing Sides is my urban-fantasy novel about three young women, who discover they have magical abilities, in a world that hates those with magic.

This will be my third draft of the story, as I try to get onto the page exactly what is in my mind.

We have Esmee, who works with the 'good' witch resistance, and believes with the right policing witches and non-magical people can live peacefully side-by-side. Nola, who is part of the 'bad' witch rebellion, and believes witches should have power over those without magic. And Maggie, who is part of the PID, a team who believe witches are dangerous and should be imprisoned/ wiped out.

3. YA fantasy about a gender-divided magical school.

This one is a new idea, and I see it as a sort of cross between The Handmaiden's Tail and The Chilling Adventures of Sabrina.

The story centres around a magical society where males are the elite and females are inferior. Men train in magic to become leaders, military, doctors, lawyers and other esteemed professions. Women are taught housekeeping, cooking and child rearing related magic.

Breena enrols at the Arcanium at fifteen, like all others her age, and at first falls in line like the other girls, knowing no better. But as her time progresses, she starts to see the inequality in the world and forms a group to challenge it, eventually uncovering a dark secret about society.

This is another one regulars to my blog will recognise, as it's a re-write of a previously unpublished story.

Eighteen year-old Ruby Collins discovers her biological parents are fae, of the Cupid verity, and now she must give up everything she knows and loves - including her adoptive parents, and her best-friend Lucas, who she's never worked up to courage to admit she's in love with. If she doesn't embrace her new destiny as a Cupid, and help seventy-two couples fall in love before her nineteenth birthday, a dark fae named Abraxas will claim her soul.

So those are my four story ideas. Two romances (though scifi and paranormal) and two fantasy with social commentary.

Whichever gets the most votes, I will write and serialize on my blog during April, and then probably self-publish a paperback edition. The other three will be the projects I work on throughout the rest of the year - so don't worry, you will get to read all four stories eventually.

To vote for your favourite, and the one you'd like to see me write during April, please visit the following poll:

What should Clare Dugmore write for NaNoWriMo/ A-Z Challenge April 2019?
Created with QuizMaker