Miles of Smiles: My List of Things that Make Me Smile 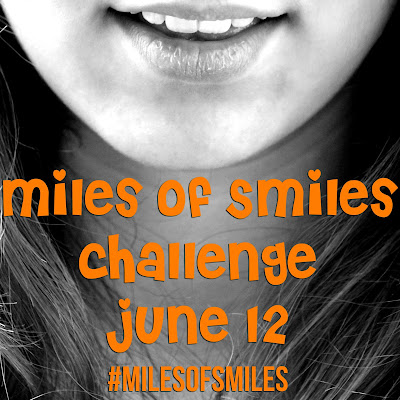 Last week, Kyra Lennon and I announced our Miles of Smiles Challenge. Our way of spreading some happiness across the interwebs in these dark times.

The aim of the challenge is on June 12 (today) those taking part post their lists of things that make them smile/ make them happy/ cheer them up when things are crappy. The obvious things like family, friends etc. are excluded. What we're looking for is the little, almost trivial things, that brighten your day.

Here's my list of things that make me smile:


1. Tumblr. I know some people use Tumblr as a platform for speaking about social issues, and of course it's full of excellent fanfic and fanart, but for me, Tumblr is my escape. I try to keep away from the political side - though I do sometimes reblog social issues that are important to me. Instead, my dashboard is full of fandoms I love, random silly things, and pictures of cute animals. Just a few minutes looking through the 106, 196 (!!) things I've liked in my five years on the site, always brightens my day.

2. Jeffrey Dean Morgan. Aside from my obvious crush on this beautiful man, since becoming a fan of JDM thanks to his portrayal of Negan in The Walking Dead, I've discovered he is a fantastic human being. He loves dogs, and two of his dogs were strays he's adopted. His love of animals doesn't stop there, though. He and his wife, Hilarie Burton (btw they're the cutest couple) own a farm where they have alpaca, chickens, and ducks among other animals. As well as owning a farm, Jeffrey and Hilarie do a lot of charity work together. They bought Samuel's Sweet Shop in Rhinebeck, New York, after the previous owner - who'd owned it for almost 20 years - died, because they didn't want to see such an important business in the community close down. And they recently spent some of their time away from work renovating a room at Astor Services for Children and Families.  Jeffery also goes above and beyond for his fans, appearing at many 'meet & greet' and conventions throughout the year, always making time to pose for pictures, and chat to his fans. Plus, his bromance with TWD co-star Norman Reedus is adorable! Basically, anything this man does makes me smile!

3. Online Doll Makes. You know those cute dress up paper dolls that were around when we were younger? The internet bought them back in epic style. Now many websites feature games where you can dress up dolls, based on different themes, like Disney Princesses, Hogwarts, XMen etc. My favourite two of these sites are Doll Divine and Azalea Dolls. I may or may not have a massive folder full of dolls I made on my PC!

4. Safiya Nygaard. Buzzfeed video producer turned Youtuber Safiya Nygaard is my favourite person on Youtube. Her sense of style, and quirky personality is just perfect. Plus, unlike some Youtubers, she doesn't stick to one topic, and posts videos about makeup, fashion, and random aspects of her life. Watching one of her videos on my lunch break always makes my day a little brighter.

5. Disney Soundtracks. I have a slight obsession with Disney movies, especially their soundtracks. While I wouldn't call myself a super fan, and I certainly haven't seen every Disney movie there is, there are some I just adore. So of course, when I'm feeling down, sticking on a Disney soundtrack on Spotify and singing along (badly) at the top of my voice always makes me feel happy. Bonus points if I find a parody of one of my favourite Disney songs, like Let It Go(t) or the Gaston Storm Song.

So, that's my list of things that make me smile. What about yours?