WIP Joy Challenge - Day Nine: How Do (Or How Did) The Main Characters Meet? 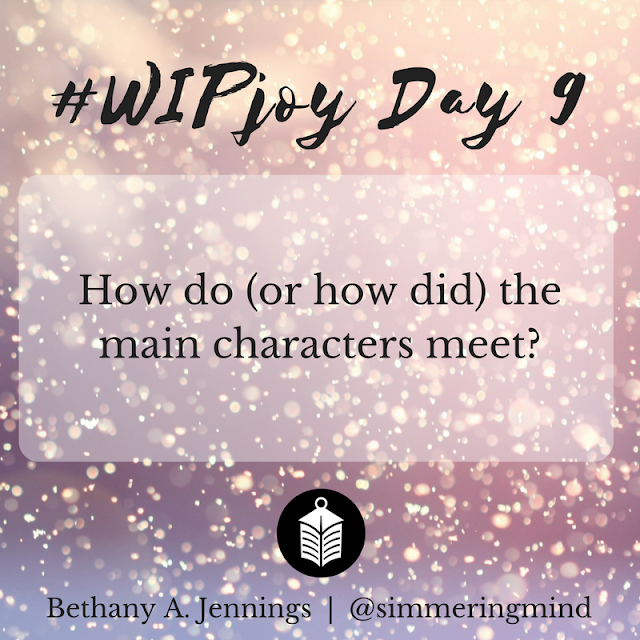 Jade met all her friends, who I described in yesterday's post, via her work as a makeup artist for G.E.M network, which is where she meets the other main character, and love interest, Seth.

Here's the scene Jade and Seth meet for the first time:

I’d just finished my sandwich, and had turned on my tablet, opened my chocolate bar and prepared to dive into the world of Marvel, when the heavy metal doors swung open, and a guy in scruffy biker boots, torn black jeans, a red t-shirt and a leather jacket entered. If it wasn’t for his age, I’d have assumed he was a guest on some music show, but judging by the flecks of grey in his dark hair and his salt-and-pepper beard, I figured he was a little older than most.

He flashed me a sheepish grin and dropped down on the couch. “Sorry. I thought it’d be empty in here now.”

I looked up at him over the top of my tablet, and smiled. “No worries. I’ll be out of your hair in a sec.”

His grin widened, his eyes dancing with amusement.

“Wow. You’re the first person to say that to me today. I snuck in here to hide out from all the ‘well-wishers.’”

He said the last word with a certain amount of disdain that had me raising my eyebrows.

“No offence, but I don’t have a clue who you are.”

The guy hooted with laughter, and his brown eyes sparkled.  “I like you.” He stood and extended his hand to me. I clasped his hand, and he shook it firmly. “Seth Marshall. New music presenter and-”

“Former front man of Stryfe.” I finished for him as the penny dropped. “Jon Harrington told me earlier you’d joined us. You’ll have to forgive me, you’re a little before my time.”

Another laugh had me grinning back, and Seth’s disposition relaxed as he settled onto the couch opposite me.