NONE NaNoWriMo? WTF Am I Even Doing? 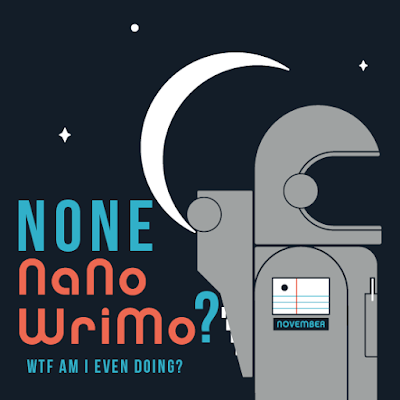 This year's NaNoWriMo has been a weird one for me.

I started off working on a young-adult, fantasy-romance. I managed 13, 498 words before deciding I wasn't feeling the story. Something wasn't clicking in my head.

So, I switched to an adult, contemporary romance. That went a little better. I managed 11, 912 words. But then after a week of writing, that story wasn't clicking with me either.

I decided to just give up on NaNoWriMo this year. I obviously wasn't in a writing heads pace.

I took a week out, played some Skyrim, and then suddenly I started thinking about this story I conceived years ago. I've considered working on it a few times, and had jotted down some ideas and notes for it. Inspired by a different story idea, I'd also filed away for a later date, I decided to combine elements of the two and began in earnest ...

In the space of two and a half days, I've written 9000 words, and this story just won't leave me alone. Whenever I'm not working on it, I'm thinking about it, and wishing I was working on it. I'm excited to share it with other people, and see what they think. This is the story that needs to be written right now. This is the one that's clicked for me.

So ... I'm aiming to complete NaNoWriMo with 50k on a hodgepodge of three different stories. I might come back to the first two in the future. But right now, my focus is on the new, third story and for the first time since finishing All It Takes, and sending it to Kyra Lennon for editing, I feel excited about writing!!

I guess the moral of the story is, if something doesn't feel write, put it aside for a while. But don't give up writing entirely, because eventually, something will click.

How is everyone else getting on. Are those of you doing NaNoWriMo on track? How about this working on other things? I'd love to hear your news!