The fabulous Kyra Lennon has re-vamped the cover of Game On - as well as updating the actual novel - and I'm here today to help Kyra spread the word.

Before we get to the cover, a quick note from Kyra:

Game On was first published in 2012. In its time, it has been through a heck of a lot of covers, but this is definitely the final one! The reason for this particular change is that back in July this year, the rather beautiful Scott King did a photo shoot for me with the equally stunning Lucy Laming– shot by super snapper Eric David Battershell. The chosen photo of Scott and Lucy will be on the cover of the final Game On book – due for release next year. Since Scott King is the perfect Radleigh McCoy, I figured it made sense to have him on the cover for Book One to match! The new Game On photo features Scott with Nadine Hart, and was shot by Scott's own team!
grin emoticon

ALSO, the book itself has undergone a bit of a change. There have been a few updates made to the book’s content – and this includes no longer cutting away from the bedroom scenes. It was a mistake I have berated myself for ever since publication that I didn’t include a sex scene. The nature of Leah and Radleigh’s relationship almost demands the bedroom scene to be written in full. I feel like without it, I haven’t been true to the overall tone of passion in the pages of the rest of the story.

These updates, and the cover, are live NOW (or later today if I mess this up and post at the wrong time - the book itself has definitely been updated!). If you have already bought a copy of Game On – I am hoping with everything I have that Amazon will be kind enough to give you a little update button on your accounts so you can re-download. If not, I will find a way around the issue somehow!

The paperback version of Game On will be updated also, but will take a little longer due to needing to order proof copies, etc, as will the audiobook, but that will take quite a while longer as it depends on my narrator’s availability.

Please keep an eye on Kyra's Facebook page for further updates! Thank you!

And for those of you who got through this - Game On is FREE today only - so, grab your newer, hotter copy now! 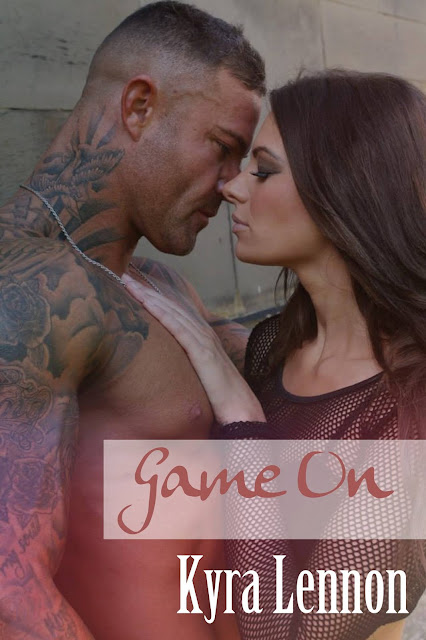 
Blurb:
After swapping her small town life to work for one of the top soccer teams in the U.S, Leah Walker thought she could finally leave the ghosts of her past behind.

Los Angeles has everything Leah ever wanted. A great job, supportive friends, and most of all, an escape from the mundane English village she grew up in. The only cloud on her horizon is soccer superstar, Radleigh McCoy. He’s arrogant, sexy - the epitome of everything Leah used to crave in a man.

But Leah is not that person anymore. After getting her heart trampled on, she knows the damage caused by guys who only have one thing on their mind. She’s determined never to go through it again, but when McCoy makes scoring with Leah his new goal, they become locked in a heated battle of wills which threatens everything she’s built for herself.

As circumstances throw them together, the chemistry between them becomes harder to ignore, and Leah is forced to ask herself whether she has really changed at all.

Author Bio
Kyra is a self-confessed book-a-holic, and has been since she first learned to read. When she's not reading, you'll usually find her hanging out in coffee shops with her trusty laptop and/or her friends, or girling it up at the nearest shopping mall. Kyra grew up on the South Coast of England and refuses to move away from the seaside which provides massive inspiration for her novels. Her debut novel, Game On (New Adult Contemporary Romance), was released in July 2012, and she scored her first Amazon Top 20 listing with her New Adult novella, If I Let You Go in November.