The Official Release of THE FAERIE PRINCE, the Favorite Fairytale Prince Blog Fest, and a Giveaway!

Last week, I told you about the awesome new author service Rachel Morgan had started up called Morgan Media.

Well, Rachel is having a busy time recently, as she's also releasing a new book, the second in the Creepy Hollow series, The Faerie Prince. It features one of my favorite paranormal creatures - fae! I can't wait to get my hands on it.

Before I hand you over to Rachel to tell us all about  The Faerie Prince and the giveaway she's hosting in honor of it's release, I'm also taking part in Rachel's Favorite Fairytale Prince Blog Fest

Tell everyone who your fave fairy tale prince/hero is and why (any day between May 30th and June 2nd, although May 30th would be best).


Everyone who knows me knows I'm not one for following the rules, so instead of picking a fairy tale prince, I've picked a video game prince, because video games are like fairy tales, right? And this video game series has produced some spin-off novels and comics, so that counts, right?!

Besides, who can resist the bastard prince from Bioware's Dragon Age: Origins - Alistair Theirin? I mean, look at this face: 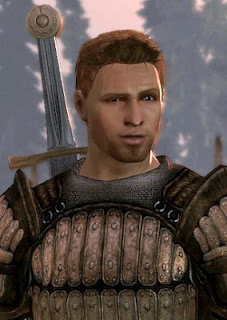 Alistair is one of the companions and romanceable characters in Dragon Age: Origins.

The bastard child of former King Maric Theirin, who was hidden away by the King's advisers to save the honor of Queen Rowan, Alistair is one of the new Grey Warden recruits - an ancient organization of warriors of exceptional ability dedicated to fighting darkspawn throughout the land - that your character encounters and eventually travels with.

When most of the army fighting the darkspawn are killed, your character and Alistair find themselves as the two remaining Wardens, and the only hope of ending the Blight.

Alistair takes his responsibility to end the Blight seriously and will stand by your character to see this done, even if your character acts in a way he disapproves of.

As the game progresses, it's revealed who Alistair's real parents were, and that now his half-brother King Cailan is dead, he is next in line for the throne.

Why did I choose Alistair as my favorite fairy tale prince?
Well, aside from the fact Alistair 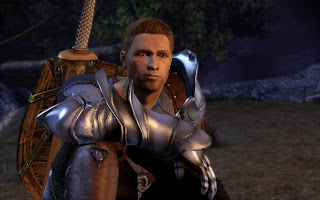 loves cheese, he is so utterly adorable and innocent. Raised away from the royal court, until his conscription into the Grey Wardens, Alistair was trained to be a Templar (the organisation that polices mages), and has little experience of the real world or romance. That doesn't stop him from being a loyal, playful, compassionate companion to your character. He is able to overlook their differences - if you've picked a different race or mage as your player character - and comes to value them as a friend (and eventual lover if you're female and wish to pursue a romance with him).

Even when life is against him, like seeing the man who raised him - Arl Amon - fall sick or having his long-lost half-sister Goldanna turn her back on him because she's bitter about the life she was given, Alistair doesn't give up, and continues to fight by your characters side, even taking on the role of King if that's the path you choose for him.

As a romantic partner, Alistair is sweet and innocent, explaining his sexual experience by saying "Have you ever licked a lamp post in winter?"and later on after presenting your character with a rose says, "I thought maybe I could say something. Tell you what a rare and wonderful thing you are to find amidst all this … darkness."

Now that I've finished fangirling,I'll hand you over to Rachel, to fill us in on her latest release ...

It's release day for The Faerie Prince, the second novel in the Creepy Hollow series! Woohoo! If you're keen to read it, you cans find it at the following places online: 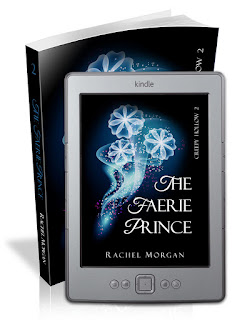 Guardian trainee Violet Fairdale is just weeks away from one of the most important occasions of her life: graduation. After messing up big time by bringing a human into the fae realm, Vi needs to step up her game and forget about Nate if she hopes to graduate as the top guardian of her year. Everything would be fine if she wasn’t forced to partner with Ryn, her ex-friend, ex-enemy, current ‘sort of friend’. They might be trying to patch up their relationship, but does she really want to spend a week undercover with him for their final assignment? On top of that, the possibly insane Unseelie Prince is still on the loose, free to ‘collect’ as many specially talented faeries as he can find—and Vi is still at the top of his list. Add in faerie queens, enchanted storms, complicated not-just-friends feelings, and a murder within the Guild itself, and graduation is about to become the least of Vi’s problems.

There will be a giveaway running from now until the end of the blog tour (Sun 9 June). A giveaway where FOUR people could win something! The prizes are a signed copy of The Faerie Prince (or The Faerie Guardian, should the winner prefer that), an Amazon gift card, a mini book pendant and necklace, and a Creepy Hollow pin badge. Check out the pic below!
Giveaway is open internationally 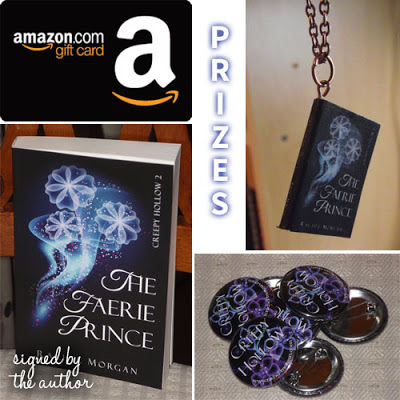