Teaser Tuesdays is a weekly bookish meme, hosted by MizB of Should Be Reading. Anyone can play along! Just do the following:
For Today's Teaser Tuesdays, I've chosen Easy by Tammara Webber (Amazon|GoodReads), though technically I finished it yesterday. It's an excellent New Adult contrary romance, with a good slice of drama. I downloaded the sample on Saturday, and was hooked. After reading just five pages, I had to finish it, and did so in little over a weekend. 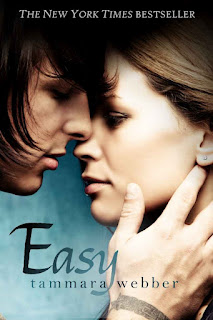 Here's the synopsis: A girl who believes trust can be misplaced, promises are made to be broken, and loyalty is an illusion. A boy who believes truth is relative, lies can mask unbearable pain, and guilt is eternal. Will what they find in each other validate their conclusions, or disprove them all? When Jacqueline follows her longtime boyfriend to the college of his choice, the last thing she expects is a breakup two months into sophomore year. After two weeks in shock, she wakes up to her new reality: she's single, attending a state university instead of a music conservatory, ignored by her former circle of friends, and failing a class for the first time in her life. Leaving a party alone, Jacqueline is assaulted by her ex's frat brother. Rescued by a stranger who seems to be in the right place at the right time, she wants nothing more than to forget the attack and that night--but her savior, Lucas, sits on the back row of her econ class, sketching in a notebook and staring at her. He works at the coffee shop in the student center. He shows up at a downtown club, disappearing after several dances that leave her on fire. Her friends launch Operation Bad Boy Phase, and nominate Lucas to be the perfect rebound. When the would-be rapist turns stalker, spreading rumors that they've hooked up, Jacqueline has a choice: crumple in defeat or learn to fight back. Lucas proves supportive and protective, but he's hiding secrets of his own. Suddenly appearances are everything, and knowing who to trust is anything but easy.

And here's the two sentence teaser: “Well, sometimes it seems like we’re flirting. And once, he said Kennedy was a moron.”

If you're thinking of checking it out, or any other book you've had your eye on recently, remember I'm hosting a £15 Amazon Voucher giveaway that ends tomorrow! Don't miss out!
by Clare _ Tuesday, August 28, 2012