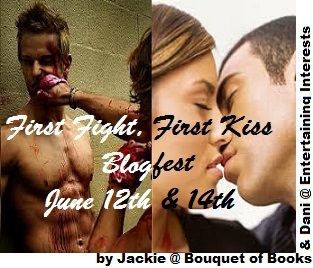 After a week's break, I'm back, and today taking part in Danielle B and Jackie's First Fight/First Kiss Blogfest.

Here's what the ladies have to say about the blogfest:

Share your 1st FIGHT and 1st KISS scenes in your MS’s, WIP’s, or real life experiences.
We want to read and experience them all! Make us feel what your characters or what you felt ... from the sting of the fist hitting the face to the taste of that first kiss.

The First Fight/First Kiss blogfest will go as such:

Once again I'm focusing on my second WiP, Perfect Ten, and sharing with you the first fight and first kiss between Nick Braxton (who I introduced during the 'Oh, My Hero!' Bloghop) and Rainie Dalton (who I will be introducing in the 'Girls Just Wanna Have Fun!' Bloghop).

"Get your hand off those." Rainie swatted Nick away as he reached for one of the iced pink cupcakes she'd placed on the counter at work. They were a special favour for Geraldine. It was Sharline's eighteenth birthday and Rainie had agreed to bake fifty cupcakes for the party.

"Oh come on. You've got plenty to spare." He was right. Rainie had intentionally made extra in case anything happened to any of the cakes. "Just one won't hurt."

"Alright, just one. But don't let anyone else see. If they know I've given you one, everyone will want one."

"Your secret's safe with me." Nick pulled off the rice paper butterfly and popped it in his mouth, before licking off the pink frosting. Once the cupcake had been cleared of all its icing, he took a bite. "Damn these are good!"

"Uh-huh." Rainie stacked up the now empty plastic containers she'd transported the cakes in and wiped down the counter.

"I mean, really good. Better than anything I've tasted in shops. You're wasted here, you know? I remember what the canteen food tasted like before you started working here. You could do so much more with your talents."

"Uh-huh. Sure." Rainie avoided his eyes and started getting the equipment out that she'd need to prepare lunch. She skittered around the small kitchen; pulling out pans, opening her knife roll, and laid out ingredients.

"Rainie, I'm serious," Nick pulled the pan from her hands and forced her to look at him. "I saw your eyes light up when we were at that country house restaurant. I heard the way you were gushing over the produce. You love this stuff, like I love acting. But you're serving canteen food. Why aren't you out there, I dunno, opening a bistro or a cake shop?"

"It's not that simple." She wriggled from his grasp and turned her back on him, focusing all her attention on chopping carrots for the spaghetti bolognese.

"Isn't it? I know for damn sure this isn't what I plan to be doing for the rest of my career. This is just a stepping stone to bigger and better things."

"For you maybe, not for me. I'm ten years older, with kids and a mortgage to think about." Rainie still didn't look at Nick, instead keeping her gaze fixed on the carrots, as she swept them off the chopping board and into a pan.

"Do kids and a mortgage stop you following your dream?" Nick asked, taking the knife and chapping board from her hands and laying them down on the counter. He laced his fingers through hers.

"Drop it, Nick. Please." She avoided his eyes, and looked to the floor.

"Why? This is important to you, I know it is." Nick hooked his thumb under her chin and tilted her head up so that she was forced to look at him.

"I don't want to have this conversation."

"You can't run away from this."

"I'm not running. I accepted a long time ago that path is closed for me." Rainie's body suggested differently, as she unwound her fingers from his and walked away, putting distance between the two of them, and once again distracting herself with chopping vegetables.

Nick opened his mouth to say something, but Rainie silenced him with a look, and then said, "I need to get to work, and shouldn't you be on set?" He shook his head. "Okay, well in make up, or wardrobe, or something. Just give me some space, okay?"

"Why won't you talk to me about this?" Nick inched closer, but as he approached Rainie moved out of reach of his grasp.

"I said I'm not discussing it with you." She stomped her foot lightly on the floor to punctuate the point, her hands planted firmly on her hips.

Nick threw his arms up in exasperation."Fine. Do whatever you want." He dropped the cupcake wrapper in the bin and strode off.

He hadn't gotten more than a few paces when Rainie called out, "Fine. I'll see you for dinner later."

When he didn't turn around to answer her, Rainie's heart dropped. She knew she'd done the wrong thing. Nick was always so open with her, and he prompted her to be the same. When they chatted he wanted to know everything; what her childhood had been like, where she'd been on holiday, what she'd experienced at college, how it felt to be a mother, memories and moments with her boys. All that she had been and all that she was, he wanted laid on the table. But not this. She wouldn't, couldn't open up to Nick about this. He wouldn't get it. He was young, with no responsibilities, and had his whole life in front of him. He wouldn't understand what it was like to sacrifice something you loved because you had other people to consider; to be utterly selfless because people were depending on you.