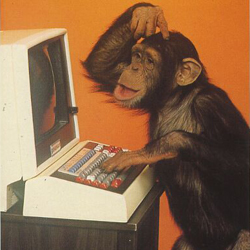 The answer to that question is probably.

When it comes to writing I love a little pressure.

Blog every day of April, with each post being based on a letter of the alphabet? Easy peasy.

Today I became aware of the Fantasy-Faction anthology Writing Contest. Which is accepting short story submissions from 1 February 2012 – 30 June 2012.

According to the handy-dandy countdown timer on the site, that gives me just five days and eleven hours to write something, have it edited and submit it.

Some people would be put off by pressure like that, but not me. I've already written 1,500 words.

They way I see it, if I win I get some exposure. If I don't win, I've still written a short story (set in the Sibylline Nights universe, that would act as back story), stretched my writing legs, challenged myself and had fun. Honestly, I'm not really expecting to win, it's more the fun of taking part and pushing myself to do something.

And ... if that isn't enough pressure I've also signed up for another contest, two blogfests and Camp NaNoWriMo in August.

The other contest is YAtopia's New Adult Pitch contest, happening on July 10th. Anyone writing NA - and if you've got questions about this emerging category, check out soon-to-be published NA author Carrie Butler's latest post at NA Ally - should check out this contest, as it's offering you the chance to be noticed by both an agent and an editor.

The two blogfests, both via Cassie Mae, are the WHAT IF? Fairytale Madness BlogFest! and the Hookers and Hangers!Bloghop.

The WHAT IF? Fairytale Madness BlogFest! challenges you to take a well-known fairy tale, and put a new twist on it. Prizes include:  Save the Cat by Blake Snyder, A FULL manuscript critique, A $25 Amazon Gift Card and A $25 Hawaiian care package.

The Hookers and Hangers!Bloghop asks you to post the hook and cliffhanger from a chapter of your current manuscript. Prizes on offer are:  A 10 page (double spaced) critique and a Friday Spotlight on FFF! And even if you don't win, it's a great way to get your hook and cliffhanger critiqued.

After my poll last month asking what story I should write for CampNaNo in August, I've decided I am taking the plunge and doing the 50k challenge, but I'm no closer to picking a story. Though the poll results favored my Untitled YA Fantasy staring a street girl named Hen, I've recently been hit with inspiration to revive and rewrite my NaNo 2010 novel Destiny's Road, and turn it into a YA contemporary fantasy. I'm sure I'll have decided by August, but right now, who knows ... ?

The links, and information for all these contests/ bloghops/ challenges can be found in my sidebar. Now that I've rambled on long enough, I let you all get back to your day.

Before I go, can I just ask, who loves my new blog header? I made the "me" doll using the Pin Up Maker on  DollDivine and I'm completely in love with it.
by Clare _ Monday, June 25, 2012