More P For Your Pound 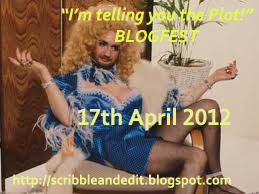 As I was doing my daily browse through the blogs on the A-Z Challenge, I came across Madeleine Maddocks' Plotter or Pantser blogfest (via Kyra Lennon - thanks for the tip ^_~), and decided to sign up.

The fest seems especially poignant, as last night I mentioned I had a new story idea I'm going to begin plotting and planning, so I'm ready to begin writing for NaNoWriMo in November.

So what's Madeleine's fest all about?

Sign up to the linky and post your tips and secrets on how you plot your novels. Even if you are a Pantser rather than a Plotter, there must be some methods you follow when writing your stories. Or you can post about any aspect of plotting.
How do you Plot your novels?

I've used both methods to varying degrees of success.

Back in my fanfic writing days I'd write on the fly, hammering out a story as the inspiration hit - usually going for about a month straight before running out of steam. Often times I'd then lose my drive, and the story would remain incomplete. However, there was one fic I had a crude chapter plan for and I deem that my most successful fanfic.

For NaNo 2010 I had no plan. I signed up a month before, and had a vague premise. During the course of November and beyond that vague premise became the incomplete (at 69, 340 words) first draft of Destiny's Road. If I'm honest, it's a mess. There's not enough ground work for the plot, characters or world. Fantasy world building is hard, and I've now come to realise you can't jump straight into a world without all the kinks ironed out. There's the reason I've since shelved Destiny's Road - it's too much of a mess for me to want to fix right now.

NaNo 2011 was different. For starters, I was basing Sibylline Nights in a slightly altered version of our world. It also helped that I'd had the idea for the story knocking around in my head for a few years before NaNo, and already had the three MCs planned out, as well as a few other characters. Before NaNo started I planned the supporting characters, and had a loose idea of the plot. I had a beginning and and end. What came in between was all discovered as I wrote, and it's worked pretty well. Some things didn't even pop into my head until I reached them, but they feel like integral parts of the story that have been there all along. Other aspects still need ironing out and going over as I edit the first draft.

Now, I'm thinking of NaNo 2012. Once again I'm faced with a story that will take some world building. This time I'm determined to get it right. I don't want to invest months of effort, and tens of thousands of words only for me to have to scrap the story. I want to be able to take this idea as far as I possibly can. That's why I'm starting now. Today I bought myself a lovely notebook (that came with a pen) and for the next six months until NaNo I'm going to plot, plan and research, so that by the time November hits, I'm can start writing knowing exactly who my characters are, what their world is, and where they're headed.

However, as a general rule, I don't like to be too regimented in my planning. As I said above, some excellent ideas have come on the fly, and often if I have too strict a plan I feel boxed in and my creative juices stilted.

My feelings on plotting and planning are best described in this quote by the awesome George R R Martin:

"But I like to compare my books to a journey.
Like that map there [gestures to a U.S. map on the wall]. If you were going from Los Angeles to New York, you would look at a map like that and you would say, well, okay, I’m going to leave and I’m going to follow the route through Albuquerque and I’m gonna go north to Denver… So you know your eventual destination and the main roads and some of the big landmarks you’re going to go through, but you don’t know where you’re gonna stop for dinner the first night, or where there’s gonna be road construction that will force you to take a detour, where a hitchhiker is going to show up on the side of the road and tell you a fascinating story. These are the things you discover during the journey.
I know the ultimate destination, I know the principal landmarks and things that happen along the way, like [big event redacted] which had been planned from the beginning and all of that. But some of them I discover in the writing. Essentially I know the big stuff, but a lot of little stuff occurs in the course of the writing. And of course some of the little stuff is very, very important. The devil is in the details. The devil is what makes the journey more than just an outline or a Cliff’s Notes kind of experience."

That's how I hope to approach writing, and if I can write a novel even half as good Martin's I'll be happy.