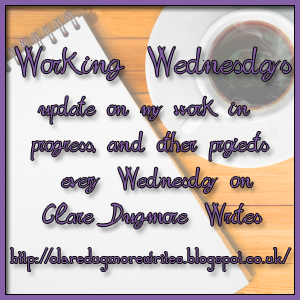 Afternoon all! Hope your week is going wonderfully so far.

I'm here for another instalment of Working Wednesday;
where I update about my current work in progress, and whatever other projects I have going on.

But first of all, thanks to all those who stopped by my Memorable Mondays post - Curiosity Quills Edition. 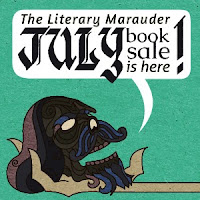 After filling you in on the exciting things going on at Curiosity Quills, I don't have much more to say about work this week. Everything is progressing nicely, as it should be.

If you're interested, Curiosity Quills is holding a staggered summer sale throughout July, each week will feature books from a different genre. You can find handy dandy links to all the titles featured in the sale on this Pinterest board.

Revisions on my WiP paranormal romance are also coming along well, and I'm working my way through the awesome critique notes from Kyra; she really is a superstar!

I also had some thoughts about starting - or should I say reworking - another project. I have a contemporary romance collecting dust on my hard drive from a few years ago, and I'm debating revising it, then posting it for free on Wattpad as an serialised story, just to get my name out there a bit and give everyone a taste of my work. I love the story, and my brain is buzzing with thoughts about it, it's just working out if I can juggle a new project, along with my PR and work at CQs.

I'll keep you posted if anything happens with the revived project, and for now leave you with another excerpt from my unnamed paranormal romance WiP.

I took another sip of water and tried to block the memory from my mind.

“Alright, love.” A guy staggered towards me, his words slurring as he spoke. He stood next to me, propping himself up against the wall, so his hand was right next to my head. His eyes raked up and down my body. He reeked of cheap booze and had no concept of personal space.

“You look hot in that dress.” His hand reached out to touch the lace panel at my waist, then snaked around to my ass.

I removed his hand from my butt, grabbing his wrist tightly enough to leave a red mark, and looked in the other direction, but he didn’t take the hint, and moved closer.

“Back off pal, I’m not interested.” I thought at somewhere like Club Desire I’d be safe from perverts, but apparently not. Guys like that pissed me right off. They saw a woman alone and immediately assumed it was an invitation to come onto her.  Pathetic. What happened to getting to know a person first? You know, maybe buying them a drink and making conversation, before you tried to feel them up.

“Sure you’re not.” His hand groped out for my ass again, and my knee instinctively flew to his nuts. It’s what my self-defence teacher told us to do; always use the knee, if you kick them they can grab your ankle and pull you over.
If this guy wasn’t going to take ‘no’ for an answer he’d have to learn the hard way.

Before I had a chance to do any real damage, my ‘admirer’ was hauled backwards and pinned up against the wall.

Thanks for reading, and please check out my personal blog on Friday for Favourites Fridays; I'm sharing photos of mine and Youngest's trip to Wonderland.
by Clare _ Wednesday, July 03, 2013