So, despite dropping out of the A-Z challenge two weeks ago (*waves to everyone who is completing it today * Congrats!) I admit I’ve been slacking a little on the writing front.

Some of that is laziness on my part *slaps wrists * and some of it is having a crazy busy week with real life responsibilities.

I’m trying to get focused again this week though.

One thing I have to balance is when and when not to write.

I not only have to juggle real life responsibilities, but sometimes I also have to admit when life is getting a little too much and take a few days off to recuperate.

As I’ve mentioned on my blog before, I think writer’s block is a myth. But I do think you can burn yourself out by taking on too much (see me trying to do the A-Z challenge on two blogs) and need to take a break from time to time.

What I sometimes struggle with though is knowing the difference between when I genuinely need a break, and when I’m just being a lazy arse.

This is when I have to "Patrick Rothfuss it", and I recalled this brilliant quote.

"Writers block is a myth. The myth stems from the belief that writing is some mystical process. That it’s magical. That it abides by its own set of rules different from all other forms of work, art, or play. But that’s bullshit. Plumbers don’t get plumber’s block. Teachers don’t get teacher’s block. Soccer players don’t get soccer block. What makes writing different? Nothing. The only difference is that writers feel they have a free pass to give up when writing is hard. When writing is hard, I grit my teeth and I do it anyway. Because it’s my job. Or sometimes I don’t. Sometimes it’s hard and I quit and go home and play video games. But let’s be clear. When that happens, it’s not because I’ve lost some mystical connection with my muse. It’s because I’m being a slacker. There’s nothing magical about that." - Patrick Rothfuss, Feb 23rd, 2011.

As part of my "Patrick Rothfussing it" and not slacking off, I made myself a lovely little timetable this week; detailing what I should be doing between when I get up at 7:30am and when the kids go to bed at 8PM (after that the time is mine and I can use it for whatever I want; be it writing, playing video games or bumming around online). It helps that said timetable can be placed on my beautiful Nexus 7, so if I’m tempted to play Simpsons Tapped Out, it’s there to remind me what I should be doing. 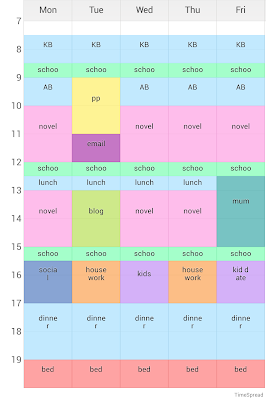 Of course, all this is subject to change, and I have to be flexible if something unexpected comes up - like Youngest coming down with chicken pox or the ASDA delivery forgetting some of our groceries - but when things go smoothly, this is the schedual I'm trying to stick to this week.

Another thing I’ve done this week to organise myself, and hopefully make my writing more productive, is created a table (yes, I love tables, okay?) of the 8 chapters/ 18k words I’ve written so far; each one listing the chapter, page numbers, word count and a brief summary. I’m hoping this will help with editing, so I can clearly see what needs cutting or rearranging. 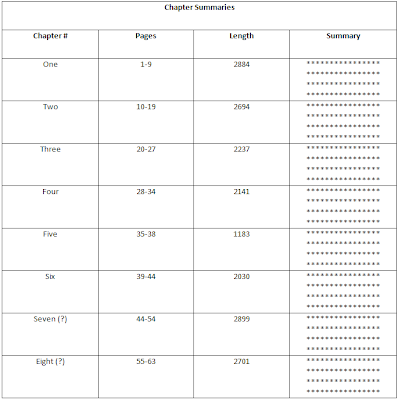 I've asterisked out the summaries, because I don't want to reveal too much about the story before it's complete, but you get the general idea. Going by the three-act structure plan I have, I estimate I've got about 2-3 chapters left to write in act one. It seems to be working out well so far, and I have a little tidying up before I'm ready to move onto act two.

What are some ways you organise your time and your writing? I’d love to hear other tips!

Hope everyone is having a good week. I’ll be hopping around your blogs shortly to catch up on anything I’ve missed, but please feel free to let me know in the comments if there’s something important I should check out.