A is for (The Order of The) Ancile

As I previously mentioned, this year I'm taking part in the A-Z Blogging Challenge on BOTH of my blogs.

Here, I'll be giving my own spin on the A-Z of Prenatural Entites. The posts make up the mythology for my current WiP, and as such, are set in that world and feature a Wikipedia style entry for each entity, as well as a personal account from an Ancile member facing that entity.

Over on my Personal blog, I'll be discussing the A-Z of The life and loves of Clare Dugmore. Please feel free to check it out.

Today kicks off week one of the challenge, so it’s time to begin discussing the A-Z of Prenatural Entities with;


A is for (The Order of The) Ancile 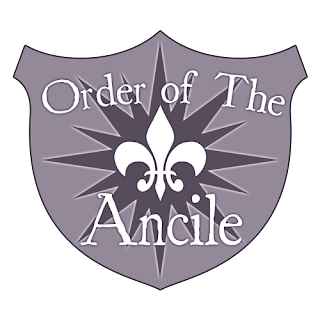 The Order of the Ancile was formed in the last year of the first millennium (1013; 10th Century) – around one thousand years ago.

It started off as a group of scholars and scientists joining together to share notes on prenatural (paranormal) phenomena.

Eventually this lead to the discovery of mortals with prenatural abilities – strength, stamina, agility etc. that allowed them to “bind” the malevolent prenatural entities.

These prenatural mortals joined with the scholars to help catch and control prenatural entities, they became known as Suppressors.

Throughout history, the scholars, scientists and suppressors have continued working together to study, document and confine prenatural entities.

Each country has a number of Ancile base facilities broken down into regions. In England, these consist of:
• Eastern
• East Midlands
• London
• North East
• North West
• South East
• South West
• Wales
• West Midlands
• Yorkshire and Humber

Sometimes staff are transferred inter-region depending on which areas are quiet, and which areas have had an influx of prenatural activity.

Each region unit consists of following staff members:
• One Scholar to document the records
• Two Scientists – usually a senior and their lab assistant, to carry out testing
• A Senior Captain of the Suppressors, who leads the physical capture of malevolent entities, and oversees the combat training of the Soldiers
• Three Suppressor Soldiers, specially trained in combat tactics used for fighting prenatural entities

Often, when an area of prenatural entities are bought under control, the benevolent beings work in co-operation with the Ancile to assist them in bringing other entities into line – therefore it is not unlikely for the Suppressors to be partnered with “tame” werewolves, vampires or other beings.

The following records are an A-Z documentation of some of the most dangerous prenatural entities and beings the Ancile have encountered in their thousand year history.

The following is from the record book of Ancile Suppressor Sol Purcell, detailing his induction into the Order and subsequent training.

Check back tomorrow for B is for Banshees, and if you're interested please check out my personal blog's first entry A is for Anne Rice.

Email ThisBlogThis!Share to TwitterShare to FacebookShare to Pinterest
Labels: A is for Ancile, a-z 2013, a-z blogging challenge, A-Z of Prenatural Entities, character: Sol Purcell, paranormal romance, The Order of the Ancile, unnamed WIP