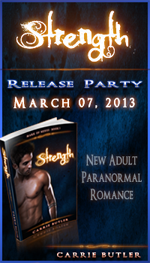 Today I'm here for the release of the fabulous Carrie Butler's Strength; book one in the Mark of Nexus series. I've been waiting for Strength ever since I first heard about it last year, and whenever I see something from Carrie about her new book I get even more excited. I've heard from those lucky enough to get ARCs that it was awesome, and I cannot wait to get my hands on it. About STRENGTH
When college student Rena Collins finds herself nose-to-chest with the campus outcast, her rumor-laced notions are shattered. Handsome, considerate, and seemingly sane, Wallace Blake doesn’t look like he spends his nights alone, screaming and banging on the walls of his dorm room. Hell, he doesn’t look like he spends his nights alone, period. Too curious for her own good, Rena vows to uncover the truth behind Wallace’s madman reputation—and how two seconds of contact had left her with bruises. Of course, there are a few minor setbacks along the way: guilt, admiration, feelings of the warm and fuzzy variety… Not to mention the unwanted attention of Wallace's powerful, supernaturally-gifted family. They’re a bloodline divided by opposing ideals, two soon-to-be warring factions that live in secret among us. When Rena ends up caught in their crossfire, Wallace has no choice but to save her by using his powers. Now they’re really in trouble. With war on the horizon and Rena’s life in the balance, he needs to put some distance between them. But Rena won’t let go. If fighting is what it takes to prove her own strength and keep Wallace in her life, then that’s what she’ll do—even if it means risking a whole lot more than her heart. 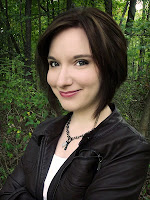 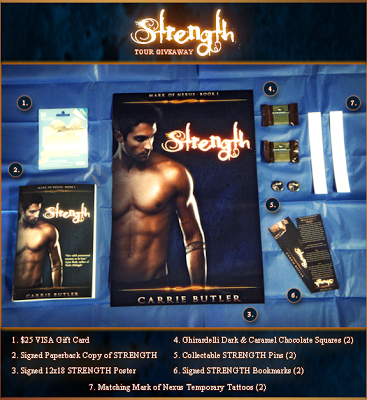