Today I have the honour of being part of the cover reveal for Carrie Butler's soon-to-be published New Adult Paranormal Romance, Strength. 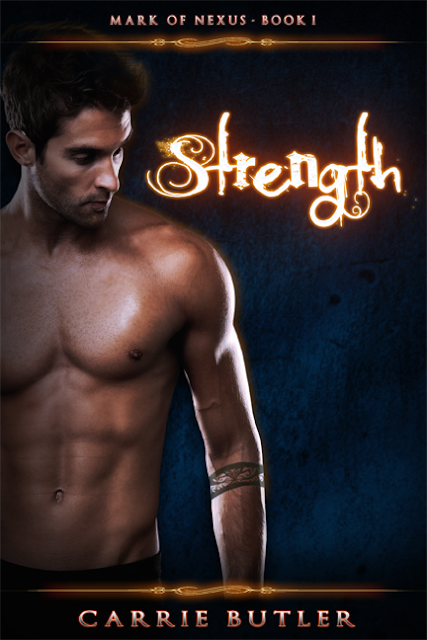 Too curious for her own good, Rena vows to uncover the truth behind Wallace’s madman reputation—and how two seconds of contact had left her with bruises. Of course, there are a few minor setbacks along the way: guilt, admiration, feelings of the warm and fuzzy variety…

Not to mention the unwanted attention of Wallace's powerful, supernaturally-gifted family.

They’re a bloodline divided by opposing ideals, two soon-to-be warring factions that live in secret among us. When Rena ends up caught in their crossfire, Wallace has no choice but to save her by using his powers. Now they’re really in trouble. With war on the horizon and Rena’s life in the balance, he needs to put some distance between them. But Rena won’t let go. If fighting is what it takes to prove her own strength and keep Wallace in her life, then that’s what she’ll do—even if it means risking a whole lot more than her heart.

But that's not all! Carrie has also made a fantastic trailer for the book, which can be seen below.
by Clare _ Monday, September 10, 2012