GHOSTS (and the girls who love them!) BLOG-HOP. 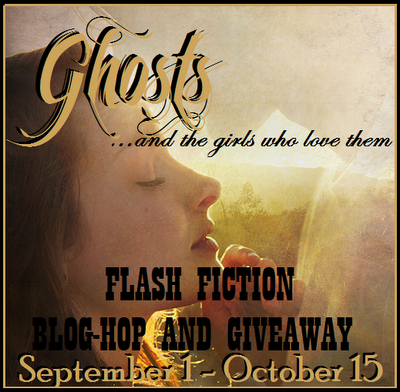 Today I'm here with Jessa Russo's GHOSTS (and the girls who love them!) BLOG-HOP, which Jessa is hosting in honour of her forthcoming paranormal romance, EVER, released on 1st October 2012 - make sure you check it out, I'm reading it now and it's awesome.

Also, make sure you check back here on9th November, for my review of EVER.

Here's what Jessa had to say about the bloghop:

Thanks to Jessa for hosting this excellent hop and offering prizes, and also thank you to all those judging or who also offered prizes. Additional thanks to my Hubby and new critique group, UnbornWriters, who offered their advice and in put.

Blessed with a Second Chance


Today should be the happiest day of my life. It was one of the happiest days of my life, though also tinged with sadness
When Daniel and I started dating, it was a huge step forwards for me, but I never thought I'd get married again.
Until today.
When Daniel dropped down on one knee in front of our friends and family, I wanted to say yes, my heart screamed the words, but something different left my mouth.
Panic rose in my chest like a band around my lungs. "I need more time." I gasped for air, as I saw the hurt in Daniel's eyes.
I ran from the restaurant without another word, and didn't stop running until I got to him.
I looked down at the lovingly tended marble headstone.
Joseph Roberts
Loving Husband, Brother and Son
June 23rd 1980-December 12th 2007
When we got married at twenty-two, they'd said we were too young. I wish we'd done it sooner. Five years wasn't enough time.
"Joey, I miss you."
The wind whispered through the trees as if to answer.
"What do I do?" I knelt and I ran my fingers across the inscription.
"Trust your heart," the sound of his voice in my head was so clear, so real, I could have sworn he was standing behind me.
Rising, I took a step backwards, seeking his embrace, and stepped into the warmth of his arms. I closed my eyes, imagining he was holding me. Five years without his touch, but still I craved it in my time of need.
When I opened my eyes again, he was there.
"How?" My voice was barely a whisper. I reached out a fingertip to caresses Joseph's cheek, as tears blurred my vision. I blinked away the droplets desperately. I wasn't going crazy. He was really there.
"I don't know how, but we've been given this time together."
"Joey, don't let me go." I clung to the flesh and bones I thought I'd never feel again.
For a few moments, we stood in silence as I lost myself in the feel and scent of him. Every sensation I'd missed so much since he'd left me.
"Tell me about him." Joseph didn't need to use the name for me to know he meant Daniel.
"You'd like him. I think if you met under different circumstances, you'd be friends. He's kind, and funny, and loves the outdoors too. He looks after me."
Smiling, Joseph cupped my face. "I'm so glad you're happy."
Having his hand on my skin was like he'd never left me. I grasped his fingers and brought them to my mouth, brushing my lips lightly across his knuckles. Joseph's wedding band glinted. I instantly felt guilty as I remembered the enormous solitaire diamond Daniel had presented me with.
"What's wrong?" He slipped his fingers under my chin, and tilted my head up so our eyes met. I stared into the pools of blue, never wanting to leave this moment. The tears I'd kept at bay threatened to return. "Abby, what is it?"
"Daniel asked me to marry him."
"That's fantastic news." My head dropped and Joseph pulled his lip between his bottom teeth. "Isn't it?"
"I don't know. I'm not ready."
The earlier tightness in my chest returned.
"Not ready for what? To marry again or let me go?"
"Both."
"Abby, you've got to move on. I'm the ghost here, not you."
"How do I do that without you?"
"Like you have been for the last five years. Go out there and live. Laugh, cry, love, hurt. Experience all that life has to give you." I heard the determination in his voice, that tone he used when he knew I was being stubborn. One of the many things I loved about him was that he could always make me see the right path, even when I was being too bull-headed to follow it.
"With Daniel?"
"If that's what you want. You said he was a good man, that he made you happy."
He did make me happy in ways I thought only Joseph could. That only increased my guilt though. Should I deny myself this joy?
"You don't mind?"
"Not if it makes you happy."
"What about you? What makes you happy now that you're … " I couldn't bring myself to say the words.
"I'm not really allowed to say, but I'm at peace. I'm happy."
"That's good."
We lapsed into silence again, as I battled the fears that had been gnawing at me since Daniel and I had gotten serious. Always knowing how to sooth me, Joseph ran one strong hand down my back.
"What happens if I marry Daniel and it doesn't work out? Or worse, what if I lose him too?"
His eyes shone with tears for a moment. "Would you have still married me if you'd have known we'd only have five years together?"
"Of course, in a heartbeat," I said without hesitation. The only thing about our relationship that left me with regrets was how little time we'd had together.
"Then there's your answer. Enjoy today, Abby. Don't dwell on tomorrow." There was that tone again, the one that told me I was being mulish.
He took a step away from me, his image flickered and weakened. I knew we didn't have long.
"I love you," I said, reaching for him desperately, but it was too late.
"I love you, too."
I sensed his presence leaving, and I could no longer see his face.
"Will I see you again?"
"On the other side, yes. But it's not your time for that … " Joseph's words turned to whispers on the trees, and I was alone. Though I knew I'd never truly be by myself. Joseph would remain in my heart, and if I chose - Daniel by my side.
I realised how lucky I was, blessed with a second chance.

Email ThisBlogThis!Share to TwitterShare to FacebookShare to Pinterest
Labels: bloghop, EVER, flash fiction, ghosts and the girls who love them, girls who love ghosts, jessa russo, paranormal romance