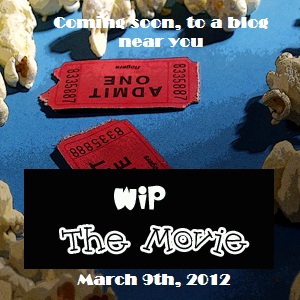 So Kyra's and Rachel's Movie themed blog hop is now here! Are we ready for some film themed fun and dramatic action?!! I know I certainly am!!!

Like a lot of you I've dreamed about who would star in my WiP if it was made into a movie. Actually, I've spent an unhealthy number of hours agonising over who would be the cast of my WiP film.

But thanks to a kick up the arse from this fest, I have cast all of my main characters, their love interests and a few extras too. Along with the 'dream cast' I've come up with a nine-track YouTube playlist that is inspired by my story.

So, without further ado, let's see what's on at the movies ...

From left to right, working my way down:

Haley Ramm as Esmee, Maggie and Nola. Right from the moment I started planning my WiP I knew the triplets were Haley Ramm. I didn't base thenm on her, but by happy coincidence she fits the bill perfectly. I think it helps that she's played both Xmen's Jean Grey and Ben 10's Gwen, two kick-ass magic/ ability wielding redheads that I love! In my perfect world there would be the budget and technology so that Haley Ramm would play all three girls with their different appearances. Clad in pink girly Esmee who has the power of empathy. Bespectacled geeky Maggie who has the power of telepathy. Gothic loner Nola who has the power of telekinesis.

Blair Brown as the triplets' grandmother Betty. Betty was the most hard role to cast in my WiP movie. I wanted someone of the right age, sixty-six, who could look both old and surprisingly young. A lot of Hollywood actresses around the right age look too young. And the older ones don't have that sprightly aura Betty sometimes displays. One minute she can be mending your socks, the next she's blasting you with a bolt of electricity. Then I saw an episode of Fringe where Blair Brown was portraying two sides of her character Nina Sharp. One scene had her looking sleep deprived and vulnerable with no make up on. I mean this in the nicest way but she looked old. In the next scene she was made up and commanding power. The perfect Betty. It helps she had red hair too!

Richard Madden as Esmee's love interest Sebastian. Technically Richard Madden is a little old, and too ginger, for the role of Sebastian. BUT I love him! And as Richard plays a seventeen year-old in Game of Thrones, I'm sure we could accept him as someone in their early twenties. Lighten his hair a little and we have the perfect Sebastian, a former Champion (witch hunters/ magical police) that switches sides and joins Betty's coven, eventually becoming a love interest for Esmee.

Alexander Gould as Maggie's love interest Quinn. Alexander Gould was easy to cast as Quinn. As soon as I saw him in Skins I knew he'd be perfect. Quinn, like Maggie, is a geeky intellectual, but with the power to summon any animal he has studied the biology of.

Sonakshi Sinha as Nola's love interest Naima. Perfect raven haired, onyx eyed, bronze skinned Naima. Nola's friend and drinking partner for many years, who re-connects with Nola early on in the story, and they start dating.

Gemma Ward as Samantha, a coven member who has a crush on Nola, but Nola rejects in favour of Naima. Samantha is a member of Betty's coven who instantly takes a shine to Nola. The two grow close, and Sam is on the verge of confessing her true feelings, when Nola re-connects with old friend Naima. They remains friends though, and Sam does her best to hide her jealousy of Nola and Naima's relationship.

Deborah Ann Woll as the triplets' deceased mother Dawn. Though the triplets' parents don't physically appear in the novel, I couldn't not  include them. This is how I imagine Dawn, Betty's only child, around the age of twenty-six, when she was killed in a car accident.

Penn Badgley as the triplets' deceased father Brady. If I include Dawn I also have to include her husband and father of the triplets Brady. He too died in the same accident, at the age of twenty-eight, leaving the triplets to be taken into care, where Esmee and Maggie were eventually adopted by other families.

Now that you have my "dream cast" how about a soundtrack?

I admit, often I don't listen to music when I'm writing. However, these nine songs make me think of Sibylline Nights for some reason or another - be it lyrics, the melody or just the feeling of the song. Coincidentally a lot of them come from TV show or movies with similar themes as my WiP.

I hope you enjoyed my little fantasy of what the Sibylline Nights movie might be like, and I can't wait to read about all of your movies.

Finally, thanks to Kyra and Rachel for hosting this excellent blog fest!
by Clare _ Friday, March 09, 2012